Supreme Court Says "Get Your Strap On"

The Supreme Court overturned the 32-year ban on handguns in Washington, D.C., ruling 5-4 that there is a Second Amendment right to own a gun for personal use. Justice John Paul Stevens wrote in his dissent that the court's ruling, its first on the Second Amendment in 70 years, showed a lack of “respect for the well-settled views of all of our predecessors on the court, and for the rule of law itself.” The National Rifle Association promptly brought lawsuits against five other cities with handgun bans, including San Francisco, Chicago, and Oak Park, Illinois.

Still unclear if the Supreme Court's decision will actually lead to the repeal of municipal gun bans Mayor Daley Of Chicago calls the ruling "a very frightening decision.".

This new ruling comes amid an uprise in shootings in the Chicago area where the city has had a ban on handguns since 1982.

The superintendent of the Chicago Police Department and Mayor Daley both blame an excess of guns on the streets for the large amount of shootings that occur in the city of Chicago
Police superintendent, Jody P. Weis has been quoted as saying “There are just too many weapons here, Too many guns, too many gangs.”

Since September, more than 20 Chicago Public Schools students have been killed by gunfire. Last school year, more than 30 students were killed, 24 of them shot — compared with 10 to 15 fatal shootings in the years before.

In the midst of the ruling I'm checking into some new gear, of the bullet proof variety!
Defender Hoodie by Britan's Bladerunner ($865). 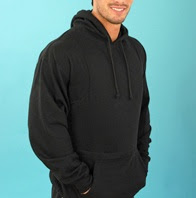