I'm loving "A Love Letter For You," a new project Stephen Powers AKA ESPO's been working on along with the Philadelphia Mural Arts Program. I'm planning a trip to Philly to check it out when the mural project of 50 painted walls is complete. They're even holding sign painting classes!

I recently watched The Universe of Keith Haring on DVD three times and was amazed at how thoughtful Keith was about doing public art. Keith wanted to do something that would last, that the general public could enjoy everyday and not have to go to a musuem or art gallery to see. Here we are 25 years later, and his artwork still can be found in many major cities from public parks, to schools, to even Woodhull Hospital in Bushwick (NOT a nice place--the building looks more like a prison than a place you would go to get better. Genius that Keith would do a colorful mural there. The place needs it). 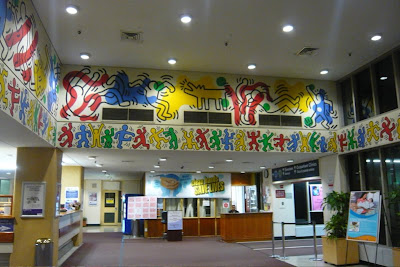 So happy about all the new murals from Anthony Lister and Os Gemeos. While the twins were painting the Deitch wall on Houston street last month, there was steady stream of onlookers, some were fans, mostly graf heads, and then random people walking by who had no idea who the Brazilian artists were. 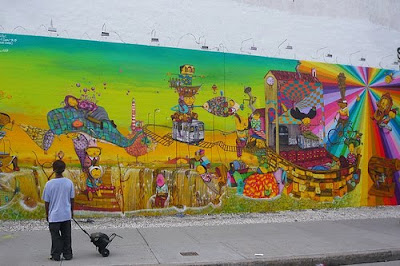 I stopped by the wall almost every day because it was on the way home from work, and there was ALWAYS a group gathered around watching them paint and just chillin' on the street, taking photos and video. I always stopped by myself, too. This shows how there is a desire, maybe even demand (especially from other graf/street artists), to see the process of their work. It was a great and rare opportunity to see Os Gemeos use spray paint for the entire mural, to see how they do their detail work, use stencils, and have almost no pre-sketches (at least from what I could tell). We took some great detail shots.
~
aloveletterforyou.com