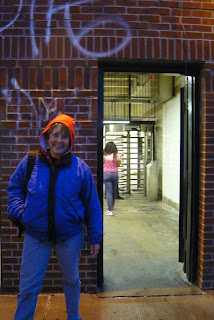 Interview and photo by Frank Serpico

At an opening at Ad Hoc Art Gallery in Brooklyn, I met up with Martha Cooper, the renowned street photographer and co-author of Subway Art. We sat down inside and caught up.

Martha Cooper: Well, I just got back from Paris and Amsterdam, then I’m going down to Baltimore, then Phoenix, and then Japan for an exhibit.

FS: Wow! Is that for your new book?

MC: Well, in Paris and Amsterdam I was selling prints because the books don’t really make money.

FS: So what’s the title of your new book?

FS: Is there a reason why you chose to do a book on postal stickers?

MC: I just began to get interested in these stickers. It was something I could look for as I walked around NY. I didn’t have to go up to the Bronx and stand around for five hours in a vacant lot and wait for a train to go by. I could do it on my way to somewhere else. It was fun and interesting for me to just walk around NY going about my regular business and keep an eye out for things I passed along the way. I hadn’t really thought about what they were so much, I just liked the way they looked. Like most things in life, you start loving the people who do it, and you learn there’s a lot more to it than meets the eye.

FS: Do you think this is your direction or purpose in life, observing graffiti art?

MC: You have to be alert to things in your life that connect you with other things. It’s not a lot of this stuff I meant to do It’s more like I grabbed an opportunity when it presented itself, but I was alert saying to myself, “Oh, this is really interesting, lets take advantage of this opportunity.” I give myself credit for understanding what I like to do and seriously pursuing things that interest me. Someone else might have similarly met the kid who introduced me to Dondi and said, “I don’t want to meet him,” and I’m like, “Oh yes, please, introduce me to him!”

FS: How do you feel about more people taking pictures of street art and graffiti and it being put online?

MC: I’m more of a person who says, “lets watch this and see what it is,” rather then saying, “I don’t like this.” I’m just interested in seeing how things evolve. When Subway Art was published there was no internet. The book was rare. If you didn’t have the book or you didn’t live in New York City, or even if you did live in New York City, there was no way to study a piece on a train. There was no way to study the style or see how it was done. The popularity of the book was due to the fact that it was the only place where aspiring graffiti artists could sit and work and try to duplicate this style and see how the Masters and the Kings were doing it. For that reason it spread around the world. There was no internet.

FS: How do feel about Subway Art being available to read online now?

MC: Actually I wasn’t aware until somebody told me, and I was surprised because I thought, “Well now, there goes my royalties.” Whatever you know this is 2008, and the book was made in 1984 it had an amazing run. It’s amazing the reach that it had and that people are still looking at it. Henry Chalfant and I are working on the 25th anniversary special edition. It’s going to be a lot bigger, jammed with almost all photos.

FS: Is it true that before you worked at The Post and did Subway Art you rode a motorcycle through the Far East?

MC: In 1962 President Kennedy started the Peace Corps and immediately I thought, “I want to do that.” I remember thinking, “Do they take girls?” I applied, and I got accepted to be sent to Thailand. I didn’t even know where Thailand was. I never even heard of Thailand which now seems ridiculous, but you have to remember Americans were very provincial--it was like nobody knew where anything was. Anyway, I went to Thailand and I taught English for two years. The Peace Corps offered you money or a ticket to go home, so I took the money and I decided to buy a motorcycle. I drove it to England. That was a long trip—16,000 miles!

FS: Haha! Did you have to do a lot of motorcycle maintenance?

MC: Ha, well I didn’t know beans about motorcycle maintenance! I drove it down to Singapore and met this guy with a motorcycle along the way. He wanted to do the same trip, but couldn’t find anyone willing to go so he says, “Lets do it!” and I’m embarrassed to say it, but I let a guy do it for me! But it was a brand new motorcycle so it didn’t need that much. It was a real motorcycle--a Honda 150.

MC: You know, it’s a whole new world out there. My advice is pursue the things you really are interested in, but don’t expect them to be the things that are going to give you a way to live in the world. I would say it’s only recently that I’ve been actually able to make a living from graffiti, and it’s by selling prints to collectors--not something I had really planned to do. I work very hard, and I still work very hard. I still do assignment photography. If you love to do things like taking pictures of graffiti, make sure you know how you are going to make a living because it’s sort of like air--if you don’t have money it’s sort of hard to breath. I don’t want to say just do what you love and money will fall from the sky. It really doesn’t work that way. You have a job right?

FS: Yeah, my bread and butter isn’t just doing graf! It’s not something I can really put on a resume—“I did graffiti for over ten years,” haha.

MC: Right, I think there are a lot of things that happened in the world that were not documented. There are probably all kinds of graffiti and street art and all sorts of art that simply fell through the cracks because nobody ever took a picture, and nobody ever paid attention. So in the long run, think ahead to what you would like to look at in 20 years. The things that I shot 20 years ago--the kids in the street, the graffiti--those are the things that are still interesting to me now. So in terms of what you shoot, shoot the things that you like, but make sure you have a way to make a living.