U.S. Slow to Help Anyone but Themselves 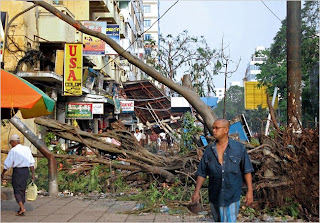 The death toll due to the massive cyclone that hit the area of Myanmar in Southeast Asia is currently at 22,500 with an estimated 40,000 people still reported missing. The U.S. has yet to send aid.

During a massive disaster when timing when is critical to survival (didn't we learn this during Hurricane Katrina already?), President Bush was very busy lecturing the junta for being bad. The Junta, a political group in power in the area, shot into a crowd recently during a non-violent protest.

We’re prepared to move U.S. Navy assets to help find those who have lost their lives, to help find the missing, to help stabilize the situation,” President George W. Bush said Tuesday in the Oval Office. Bush was busy signing legislation awarding the Congressional Gold Medal to Aung San Suu Kyi, the democracy advocate who has long been under house arrest in Myanmar.

The policy was presented by the first lady, Laura Bush, along with a lecture to the junta about human rights and disaster relief.

“This is a cheap shot,” said Aung Nain Oo, a Burmese political analyst who is based in Thailand. “The people are dying. This is no time for a political message to be aired. This is a time for relief. No one is asking for anything like this except the United States.”

Posted by Heather Schmidt at 3:31 PM