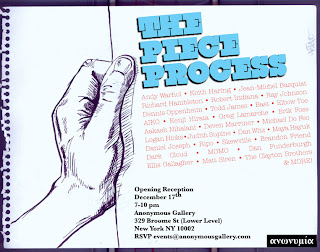 Of all the many new galleries opening on the Lower East near Chinatown, Anonymous Gallery is our favorite. Why, you ask? Check out the line up for their next show, The Piece Process, opening this week:

Anonymous Gallery is proud to combine three generations of prolific artists whose work has been influenced by, or has directly influenced popular culture, design, and the urban environment.

Posted by Heather Schmidt at 4:48 PM