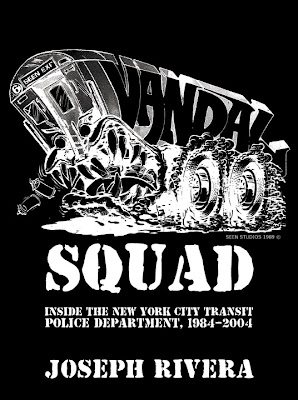 From PowerHouse books: "The recent release the book Vandal Squad: Inside the New York City Transit Police Department, 1984–2004 has caused consternation throughout the global graffiti community with charges that author Joseph Rivera is profiting off the very criminals he spent his career incarcerating." (Um, he is profitting off of them and so is PowerHouse books, $35 a book is a bit much, but nevermind.)

"In response, the powerHouse Arena will host a conversation between former members of the Vandal Squad and the graffiti writers, the first such event of its kind. With the intent of providing an open forum for public discussion to discuss the issues regarding the methods that the Vandal Squad employs and their impact on the lives of the writers themselves. Panelists include Vandal Squad author Joseph Rivera, former Commanding Officer Lieutenant Steven Mona, original Vandal Squad Lieutenant Ken Chiulli, graffiti legend COPE2, graffiti activist Ket, and street artist ELLIS G. The event will be moderated by cultural consigliere Sacha Jenkins SHR."

Think there will be a throw down? Or a stimulating conversation on vandalism and the law?

Posted by Heather Schmidt at 2:44 PM