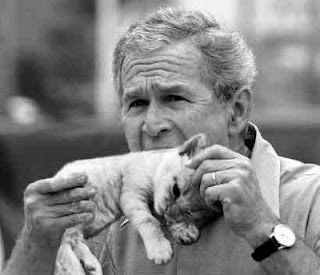 In the upcoming kitten vs. Newborn election I'm Voting for Brad Esposito the cutest Kitten ever.
I'm all for voting rights for the animal kingdom!

Watch his ad here:
www.kitten08.org
Born in the American heartland, Senator Esposito first held public office as a member of the Appleton, Wisconsin School Board following his two tours of duty in the Iraqi Peace Corps. His long career of public service and record of results continued as a State Assemblyman and then as Comptroller of the State. Launching a long shot compaign for United States Senator, Esposito was elected on a strong platform of reform and respect for our troops.

As President, Brad Esposito would fight for everyday middle-class Americans like you. He would act immediately to bring the troops home, where they belong, while continuing to go after the terrorists wherever they may be hiding, so that they may be retrained to fight those who do harm to our environment.

But there’s more to Senator Brad Esposito than just his strong stance against the war and his fresh new voice for a new generation that wants a new kind of politics. Senator Esposito has put forward plans to establish universal healthcare for all illegal immigrants, and a brand new bureaucracy to regulate pet food safety on a daily basis.

Of course, Brad Esposito is perhaps best known for his passionate and prescient sounding of the alarm for the health of our environment, and his early insistence that climate change must be fought with hybrid cars and windmills. His hard-hitting, PowerPoint-driven feature film documentary, An Unfortunate Honesty, set records for most awards ever given to a single film.

Throughout his years in the political trenches, Brad has never been afraid to take on the tough fights, from Halliburton to AIDS to his rebellion against Republican cronies and fat cats.

Frank Tambanelli DOESN'T care about YOU!
He's a baby!

Watch his ad here:
www.babyforpresident.com
Republican Frank Tambanelli is proud to be a born-again Christian and an elder in his evangelical church in his adopted hometown of Charleston, South Carolina, where he lives with his lovely wife Linda and their children Emma and Frank, Jr.

After spending his life building businesses in oil, construction, and futures, Frank Tambanelli decided it was time to put his proven experience in leading successful companies toward public service, so he founded the Frank Tambanelli Foundation, which funds international redevelopment and rogue pro-democracy para-military operations. After serving as co-chair of the President’s Council on Physical Fitness, Mr. Tambanelli returned to private industry, but soon felt the call to serve his country once again.

Guided by principle and a deep reserve of faith in God and country, Frank Tambanelli is a firm believer in a strong military and an aggressive prosecution of the War on Terror. In stark contrast to the liberal Democrat party’s failed tax-and-surrender policies of a pre-9/11 world, Frank Tambanelli is honored to lay out his time-honored principles for all the voters to see.