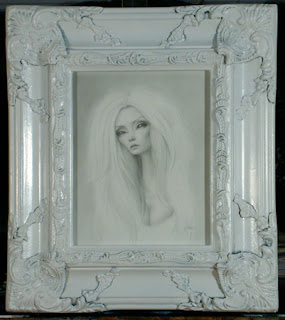 On Wednesday, February 27th at approximately 5pm, an original drawing by Lori Earley was stolen directly off the wall of her current solo exhibition, Fade to Gray, which just opened this past weekend. The drawing “Untitled” was in an elaborate white frame, measuring 16" x 14".

The suspect in question is a white male, approximately 6’2” tall, in his mid-to-late thirties. He was seen wearing a blue baseball hat with a navy blue backpack, and he spoke with a very heavy New York accent.

I'd like to think the art thief is right now molesting the piece in his tiny apartment, keeping it in a unlit room, and feeding it old hotdogs until someone leaves him $35,000 in unmarked bills in a garbage can in Seward Park with no funny stuff.

Posted by Frank Serpico at 9:51 PM

its pretty awsome that peopple are still pulling art capers and not style capers !

I like the frame better than the artwork. Seriously, and amber alert?