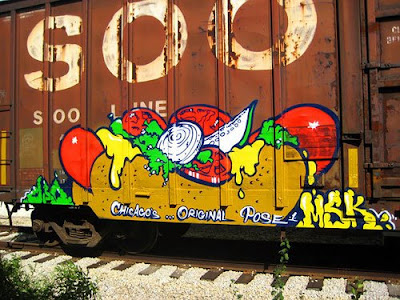 Check out an interview with Chicago's Pose MSK on Bombing Science.

Bombing Science: How did you get into Graff and what were your early inspirations?

Pose: Boredom and the unbelievable urge to be up everywhere and rock burners. In the early nineties (pre-buff) Chicago’s graff scene was BOOMING! There was so much good graffiti and so many writers, shit was destroyed, riding the trains as a child it was the most unbelievable shit I had ever seen, nothing could describe it. With Graff visually sinking in your whole childhood you just get to a breaking point where you go out, rack some shitty cans and try your hardest to figure it out. Then comes the wildfire that takes over your life, the excitement, bombing, chases, beef, wars, court cases, racking, friends, fights, good times, stories, travels. The next thing you know it just completely consumed the last 17 years of your life.

BS: When did you realize this was what you wanted to do for the rest of your life?

Pose: Ha, I still haven’t figured out if it is! Seriously I’ve been asking myself that question a lot the past few years, and unsuccessfully attempting a retirement / hiatus. I have massive OCD so painting graffiti has been less about a choice and more about a life coping mechanism for me. Either way regardless of how bad graffiti will run your life through the ringer there is nothing that compares to it and I'm sure I'll never be able to fully quit...ever.

Posted by Heather Schmidt at 2:18 PM