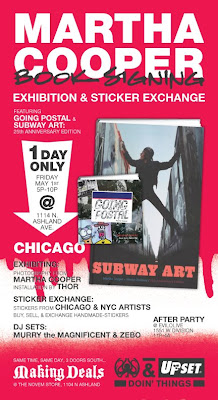 You can't miss this one! On Friday, May 1st Martha Cooper will be in Chicago signing copies of the new 25th Anniversary edition of Subway Art and Going Postal books! We're curating a huge handmade sticker exchange for the event. And just a few doors down at the Novem Studios Store, our own Frank Serpico will be premiering his new zine, Making Deals.

For the first time in her thirty year career, famed street photojournalist Martha Cooper will be coming to Chicago to release the highly anticipated 25th anniversary edition of the bestselling book Subway Art. The new edition features a large-scale deluxe format, heightening the visual impact of her classic graffitti images and adding new photographs and text. Going Postal, Cooper’s new book about the burgeoning postal sticker art scene in New York will also be available. Cooper will have photographs for sale at the event, and artist and Chicago native, Thor will be creating an art installation based on Subway Art. The event will take place at Novem Life, 1114 N. Ashland in Chicago.

Martha Cooper is a Manhattan-based documentary photographer whose vintage images of graffiti and hip hop culture are widely published. Subway Art, originally published in 1984, instantly became a staple in the collections of graffiti art and hip-hop fans everywhere and is commonly referred to as, “the graffiti bible.” The project was an in-depth look at the environment captured during the 1970s and 80s by photographers Martha Cooper and Henry Chalfant.

To coincide with Cooper’s release of her other new book, Going Postal, Upset, a collective of artists from Chicago and New York, presents a handmade sticker art sale featuring work from many of the artists in Cooper’s postal sticker art book. Over 60 artists from New York and Chicago are involved in the sale. All stickers sell for only $5 and artists are encouraged to exchange stickers with other artists. Featured artists include Blanco, C-Damage, Faust, Overconsume, Stomach, and more. 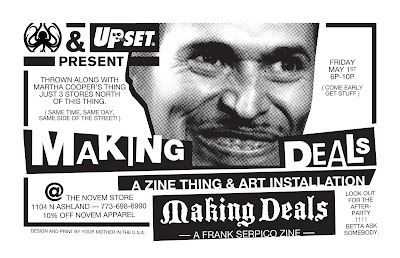 The Making Deals Chicago zine premiere takes place at the Novem store, only a few doors down from the Martha Cooper event, at 1104 N. Ashland. The New York City based zine compiles images that creator Frank Serpico finds personally interesting including graffiti, drug dealing, 70s cinema and sports, and urban mayhem with a focus on New York and Chicago—the artist’s hometown. Making Deals issues 1 through 3 will be available, each printed in a limited edition of 100. Issue One features an interview with Chicago graffiti legend Sivel. For the premiere, Serpico, who is also co-founder of Upset, will have illustrations and paintings available for sale.

The Upset is a community of friends, photographers, and artists who have pooled their talents into an artist’s collective with a focus on American street culture. The Upset currently curates art events and publishes an independent magazine. For more information visit upsetmag.blogspot.com.

Novemlife.com originally launched in 2006; created by the Chicago art collective Novem Studios as a platform to collaborate with other artists and performers. The site contains featured artist interviews, photos, and footage, while maintaining a running blog updated by the Novem team itself. The Novem Life space is a storefront gallery on Ashland Ave, opening especially for this event. Located steps away from their permanent retail space, Novem plans to have doors of both spaces open for the event. For more information visit novemlife.com.
Posted by Heather Schmidt at 11:54 AM

there's a 25% discount if you use the promo code at the publisher's website http://www.chroniclebooks.com/index/main,book-info/store,books/products_id,7883/