A Conversation With Josue Pellot

Interview and photos by Frank Serpico 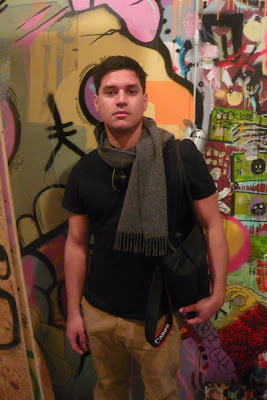 Frank: Tell me about your brother ABIT.
Josue: The one thing that kinda sucked was when Joel left, the street style he was doing was different, he would have been up there. He starts something and he goes to the end.

F: Was he one of the first people doing big street smackers in Chicago?
JP: No he wasn’t the first person to do street smackers. I know WERE had done them first, those were crazy, they were right in the middle of the street, big ass letters.

F: Where about?
JP; The first of those I saw was around Kedzie and Diversey--it was silver and black, black outline. Yea, it was way different, Joel was doing ABIT fill-ins wherever he could, big ugly ones; cool ones as he got better. Then he got in trouble in high school and he went to Puerto Rico.

F: Where did he go to High School at?
JP: Calvin Park.

F: What writers were from there?
JP: There were some, a lot of MOM crew guys, but they were mostly on thug’n and selling drugs, it wasn’t like other schools at the time, you know, that were more Hip-Hop even though those guys fought, these guys were more a buncha writers that were into gangbanging. I think Disk was a Cobra, Pen was a Cobra, Rival was a gangsta, CGT crew, they called it Chicago Gangsta Tribe, it was like some gangster westside writing shit. STN had a few Maniacs, but STN crew was more into strictly hip hop, writing, MCing. That’s just from my experience.

F: Tell me about the crews you were in?
JP: I was in MOM crew, then KMD

F: KMD stood for the intersection of Kimball, Milwaukee, & Diversey right?
JP: Yea, back when it was hood. It also stands for Kiss My Dick.
F: Hahaha!

F: Do you look back at how things were back then and think, "Wow, I made it out of there ok"?
JP: I don’t look at it like that, like I made it out of there. I think I just took a different route, my interest changed, now I do a lot of politically driven work, more personal work, but the influence of graf and style you can still see it. I wouldn’t say I completely divorced it, I see graf historically, I don’t see it as graffiti and that’s it. Like any other movement in art history, graf has it’s movements. It has it’s style, old school, new school, the stuff that people are doing now, Chicago style, New York Style, European, American. You can talk about graffiti in an art historical sense, in that same matter, if you choose to really sit down and talk about it. I’m still really interested as far as style. 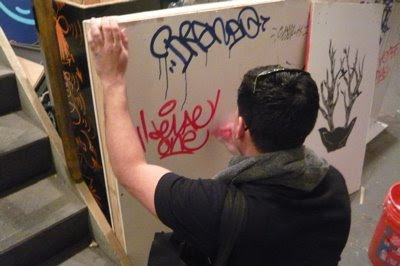 F: What’s some of the stuff you're working on now?
JP: Installations, I’m trying to do at least one public installation a year. In 2007 I did that giant flag off the expressway, and this past summer of ’08 I did the neon in the liquor store, and this year, if everything works out, I want to do a infomercial and get it on TV in Puerto Rico…oh and Youtube! Youtube is for sure, you know, because anyone can put something up, but I want to try and get it on a local network and try and have someone give me a minute of air time.

F: Do you think that your interest in graffiti is part of the reason why you put your art in public like that?
JP: I do. I don’t think about it, but when someone asks me about it, I do feel that doing things on the street, doing things that are illegal, I guess it’s a common thread of what I’ve always been interested in. I don’t do it on purpose, I think it just happens.

F: Is it kind of a natural thing for you?
JP: Yea it’s natural. The other thing is the conversation is different. When something is collecting dust somewhere in a gallery all pretty, you might only have a certain amount of people talking about it and a lot of times it’s people who have a certain amount of money in their bank account and that’s not necessarily who I’m really talking to. They might enjoy it and appreciate it and pay for it, but I kinda want to talk to everybody. I think that’s where the whole public thing comes from for me.

F: That’s awesome!
JP: The flag was just like bam! From the island smack in the middle of the expressway and it’s just so people can talk about it, creating dialogue you know that’s what my work is, it’s all about dialogue and creating conversation.

JP: The neons were specifically for speaking with that Puerto Rican neighborhood. Within those six to eight blocks of Chicago I put them in the liquor store right in the windows.

JP: I also made these vending machine toys, I had my family made into small replicas like the little homies figures. They would look cool in a gallery but then I sold them for fifty cents in the stores vending machines so people in the neighborhood could buy them and talk about them.
F: Sounds like you’re doing some amazing stuff!
JP: Hope I don’t go broke!
F: Hahah, Good luck and I’m looking forward to that video project!