This is a letter written 12 years ago from the original owner of Quimby's Bookstore explaining why he and his wife were leaving Chicago (and their store) for Amsterdam. They ended up selling the store to Eric Kirsammer, the owner of Chicago Comics. 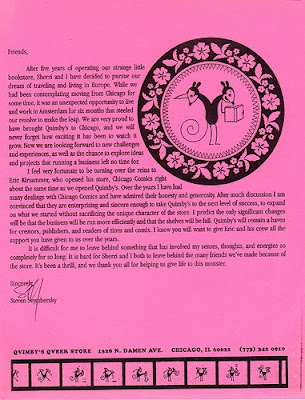 I remember visiting Quimby's when it first opened in the early 90's on Damen. I lived nowhere near there so it was always an adventure getting there by CTA. Dodging the weirdos standing by the old Busy Bee diner, as well as the dudes slanging drugs in the park as I walked to Quimby's. But it was worth it for the incredible variety of books and magazines they offered. I bought a great handmade mini comic there by Chris Ware, who lived around the corner from Quimby's. He, Archer Prewitt, and Dan Clowes (Ghost World) would do signings there. It was also one of the few places in Chicago to find graffiti magazines, which was a bigger deal in those pre-internet days. 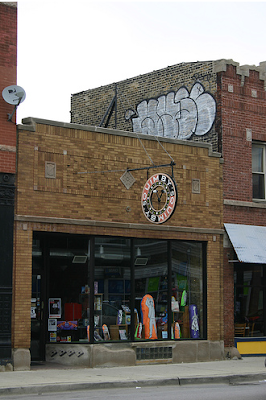 I thought things would change for the worse when it moved to North Ave but the store actually got better. There's a larger selection now and the mini art shows in the window display are always fun to see. I'm glad that it didn't get shut down. Seeing the original name at the bottom of the letterhead is funny though. It was always a pain to explain that name when I was recommending it to people. Reminding them that "weird" was the original definition of "queer". I hope that the store continues to operate for years to come. It's seriously one of the main things I love about Chicago.

POSTED BY FOTOFLOW via Passing of the Baton, originally uploaded by Caboosezine.