The story of Chad Lindsey an actor who rescued a man fallen on the train tracks and then disappeared into the masses of midtown: 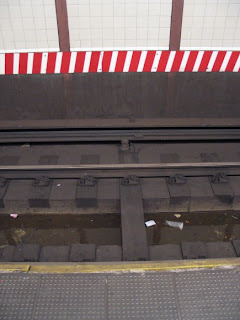 “I’m kind of zoned out, and I saw this guy come too quickly to the edge,” (Lindsey) said. “He stopped and kind of reeled around. I felt bad, because I couldn’t get close enough to grab his coat. He fell, and immediately hit his head on the rail and passed out.”

"The man wouldn’t wake up, he said. “He was hunched over on his front. I grabbed him from behind, like under the armpits, and kind of got him over to the platform. It wasn’t very elegant. I just hoisted him up so his belly was on the platform. It’s kind of higher than you think it is.”

“I couldn’t see the train coming, but I could see the light on the tracks, and I was like, ‘I’ve got to get out of this hole.’ ”

Posted by Heather Schmidt at 10:04 AM