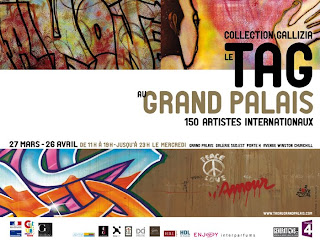 Over 150 graf artists are showing work at the French exhibition, "Tag" is enhancing the international recognition of graffiti artists. Among those honored in the show at the Grand Palais in Paris are four New York pioneers who have been active since the 1970s: Toxic, Quik, Seen and Rammellzee, the last of whom showed up for an opening event in a Darth Vader-style mask.

The exhibition runs through April 26th was organized by Alain-Dominique Gallizia, a French architect who became interested in graffiti as an art form when he encountered examples of it at his work sites. Most of the 150 artists involved are mostly from the United States or France, but countries including Australia, Brazil, Chile and Japan are also represented.

Via NYT
All these vids are in French, so if you don't speak the language enjoy the imagery:

Whatyouwrite.com has some really comprehensive photos of the exhibit here.
Posted by UPSET MAG at 10:19 AM