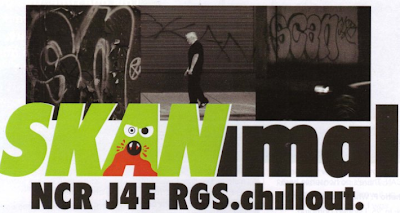 Interview with Scan from Upset Magazine, Issue 1
by Ghetto Po

Chicago graf writer SCAN (NCR/J4F) has a reputation for being a rugged street bomber doing tags, large throw-ups, and street smackers. This interview sheds some insight into what makes the SCANIMAL tick.

Ghetto P: These photos are pretty much all street spots, huh?

What year did you get into graff?

In ‘95, I started bombing immediately. I was with PISTL (J4F/RGS) and some other guys; they were bombing on the tracks. I was like, why are you wasting time on the tracks, when we can run down Irving Park? I started doing tags and throw-ups; it was that summer in 95. I started ripping it up.

How did you come up with the name SCAN?

I came up with it myself. I was always the one that spotted the cops first, lookin’ around. Very observant.

What part of town were you running?

The northside, Six Corners area, ripping that up, then I started to meet more people and decided I had to broaden my horizons. Then all-city for the last 12 years.

SIVEL and LEAF (J4F). Before I even started writing, it was SIV and LEAF on the Blue line. They had silver and black fill-ins on almost every single rooftop. I was pretty impressed by the whole fucking thing. I guess LEAF at the time was still a school kid. I heard through the grapevine that he was still a young kid, so I decided at that time that I had to make a point.

Who were your early partners?

What gets you hyped to do graf?

Aggravation of normal life. Nobody can tell me that I can’t do it. It’s up to me, and if somebody were to tell me no, they better have a badge and a police car, and they better not have 20 pounds of equipment, cuz I’ll blow their ass away when they chase me!

Who were some of the early crews you got down with?

UFO was one of the first crews I got down with, it was CEBL’s crew, besides me and CEBL, it was a bunch of Filipinos, so we’d call it the united Filipino organization. Haha! 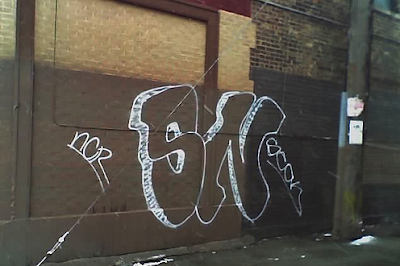 What’s your method of bombing?

Don’t let anybody see you. Be in, be out, be quick, be efficient, and be professional.
To me, straight letters are the shit, don’t do bubble. If you can’t do straight letters you must be illiterate.

How do you feel about Chicago? 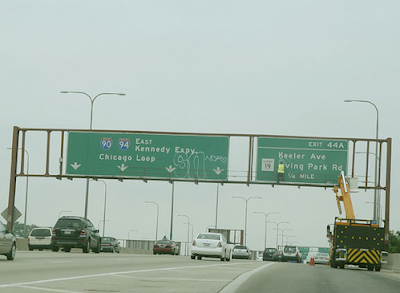 I feel like I’m holding the load, if I’m not bombing the Kennedy, what would be up on it? I was talking to SIVEL, and he said he saw me up every day this summer, cause he’s constantly driving around. It’s nice to know that people are still paying attention. If I didn’t hear any feedback I would stop.

Last night I did the Montrose open tunnel. A train had just passed before I ran across, I’m like, ‘ain’t no big deal, I’m running the show here.’ I start doing my throw-up, not even thinking about the train. What creeps up on me? A fucking 8-car! I see it out of the corner of my eye. Mutherfuckers sitting right there. I had already done my outline, I’m starting on my shadow, and I try doing it really quick. The train is coming up slow. I’m doing the shadow on the “A,” I’m thinking ‘I better go.’ Then the train comes to a full stop. I run two blocks down the tracks, across the expressway, and up the embankment to the Metra tracks. There’s the Gatorade that I had left, because I knew I’d be thirsty regardless of what happened. I take a sip of it, blaahhhrrr. I start barfing and I’m jogging down the way, and I’m sweating my ass off, I’m puking. I really hauled ass because I thought the cops would be everywhere. I'm sure they were all there, but fortunately I had parked about half a mile down, if the (train driver) even called the cops in the first place.

I started it. The first name for it was Ninja Crazed Riters. Ha! How retarded was that? The first time I threw it up I put up NRC, because I was so nervous.

What’s the history of NCR and RGS?

I was selling weed to them, and we just started hanging out. We got along, I just started throwing them up, and they didn’t even put me down yet. Me, DKAF, EGGS, MELON, and KC (were in RGS at the time), but I really got their attention when I was bombing down Grand and the C-Notes (a local Italian gang from the area) were saying who the fuck is this guy SCAN? I was wrecking Grand Avenue up by Ashland, Damen and Western.

So who put you down with J4F?

LONE (originator of J4F). I was put down with UAC and J4F at the same time. Actually it was LONE and CABIE. They were telling me, “You can’t put up J4F if you’re sticking with NCR.” I told them, “I don’t see the point, I’m NCR, I’m not going to do it”. They said if you want to be down with J4F, you can’t put up anything else, and I responded, “If you want to see your crew up all over the place then I guess it’s up to you.” Then CABIE came up to me and was like, “Alright man, whatever you want, it’s your deal.”

What years do you consider your prime?

I started right when the buff started. I did the Blue line tunnels between Damen, Division, and Grand Avenue. It was Christmas I did like 30 fill-ins under every light. That was when the Democratic National Convention came through Chicago (1996, known as the time Mayor Daley first buffed the entire city). The buff cleaned out everything--the tunnels were wide open, I was down there for like 5 hours. When I was down there, the tag I so the most was BEL. He did all the spots that if you’re down there bombing you would see them, but if you were on the train there would be no way you could see it.

I took a long break, and then in 2000 we had that snowstorm. Shit stayed up for like two months. DJ PNS was on WNUR radio, giving me props because I was wrecking shop so bad. I had face smackers pretty much wherever you drove between 2000-2001.

What was the whole J4F/CCA beef about? Was It because of you?

Naw, that beef was way before me, I started my own beef in like ‘97/98. Two CCA guys were walking down Irving Park and Keeler, and one of them had a CCA on his hat. I was like, “You CCA?” He was like, “Yeah, so what the fuck?” So right away he was getting all beefcake about it, he was talking shit. I took a swing at him, and I missed. We start fighting now, I’m with four or five of my friends, they all go after the other guy and me and the guy in the hat fight one-on-one.

Did the beef get settled?

Well, CCA tagged the inside of my house, climbed in through a window. I put one of them in the hospital because of that. They retaliated by setting my car on fire. Needless to say, I ran into them outnumbered plenty of times after that, I actually even gave one of them a ride somewhere, so yeah, we got over it.

I’m thirty years old, and I’m still bombing. I’m doing this for my own personal satisfaction, but I want people to notice. People say that graffiti is dead. Graffiti is only dead if you let it die--if you stop, the next kid will stop. If one guy keeps going, hopefully it will get others hyped up to get their name out there as well. Basically, keep your eyes open, because I’ll still keep it going. 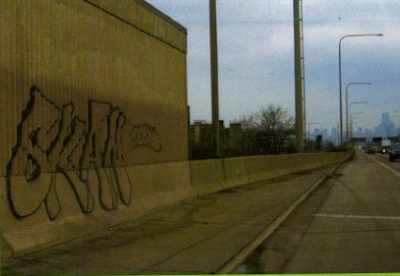 Dude totally is no no nonsense.

Rest in piece Chris.. Aka Scanimal. You were a true Chicago king,legend and you will be missed. I met you in our high school years but you honestly made me feel like we we're preschool buds. I can just imagine how many SN are up there in the clouds now. Middle finger in the air!! FloatingOnClouds.
-Juls