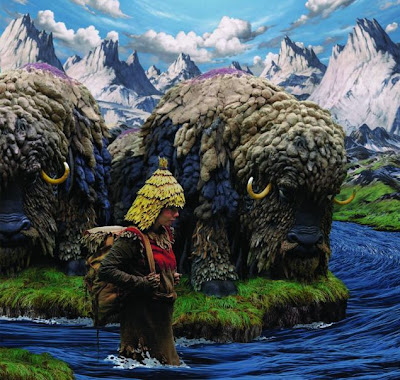 She's done it again. If you haven't seen it already, check out Bjork's innovative music video masterpiece for her single "Wanderlust." It's a 3-D (yes, get out your glasses!) visual menagerie directed by Encyclopedia Pictura. Filmed with a custom made stereoscopic camera rig and a mix of puppets, scale models, and computer generated animation, the stunning video took nine months to film and channels the folklore of the mountainous Alps.

The video premiered at Deitch Projects Studio in Long Island City, Queens earlier last month. The video was actually shot in the Dietch space. The official release date of the video was yesterday, but it's hard to find a good quality version in the virtual world. It will be released later on DVD.

In the meantime, I highly recommend viewing the clear 2-D version of "Wanderlust" on the Enyclopedia Pictura website here. Wow.

Posted by Heather Schmidt at 10:28 PM

I'd give it all up just to have Bjork sing me to sleep.